Advancing on the Virtual Frontier

Reaching beyond the traditional domains of sea, land, air, space and cyberspace, the U.S. military now is exploring its newest realm: the virtual world. The services are creeping cautiously into the latest frontier of simulated worlds with islands and avatars. This is not a simple maneuver. It is one filled with hurdles and pitfalls, but it is a domain that the U.S. Defense Department understands it can ignore no longer.
Technology

U.S. Marines providing on-site command, control, communications, computers and intelligence support have a new tool—a tactical network in a box—that allows them to learn to use the most recent software in a virtual environment.
Networks

U.S. Army soldiers have something in common with Superman and Spider-Man: they all benefit from Army-funded virtual reality research being conducted at the University of Southern California Institute for Creative Technologies. The Oscar-winning research has made digital characters look more realistic in movies such as Avatar, Spider-Man II and Superman Returns, among others, and it also helps soldiers cope with post-traumatic stress disorder. It also is used to train service members for a variety of missions and situations, including countering both improvised explosive devices and insurgency operations, as well as tactical intelligence gathering. The institute’s research, which rapidly is taking the “virtual” out of virtual reality, also helps teach soldiers such traits as leadership, cultural awareness and relationship building.
Education

School Has the MOVES for Cyberspace Cooperation

Virtual collaboration is both the now and the future for communications among people in many walks of life. For the military community, the continued immersion in network centricity allows and demands more methods of online information sharing. The process saves time, resources and most importantly, lives. The civilian sector is experiencing increasing chances to collaborate in the virtual realm as well, and the two factions’ technologies and practices increasingly are overlapping. The Naval Postgraduate School has dedicated an entire institute to various methods of virtually connected communications, and its director sees almost unlimited room for growth and advancement in the area.

The U.S. Army is leveraging the latest advances in computing power and digital hardware to expand and improve training using virtual reality technology. Whether it is teaching soldiers how to exit an overturned vehicle safely; reinforcing lessons learned in ground patrol training; or even helping returning warriors cope with post-traumatic stress disorder, virtual reality simulations are enabling the Army to train more effectively and economically.
Education

Virtual Design Challenge Opens To All

A new competition is opening up the process of developing and improving virtual training environments by streamlining the rules and requirements for participation. By reaching out to the global design and development community, the Federal Virtual World Challenge seeks innovative, outside-the-box ideas to provide the U.S. government with virtual training and analysis technologies.

The value of the virtual realm for training has been recognized for some time, but now artificial reality is being exploited for many other applications. Web 2.0 capabilities have opened new doors in cyberspace, and people and organizations are embracing the new world of virtual collaboration. The only limits to using this make-believe realm may be those of human imagination. SIGNAL's May issue looks at ongoing efforts to explore collaboration in the virtual world.

Virtual Reality In the Sky

An embedded technology will soon allow fighter pilots to engage virtual aircraft and ground targets during airborne training. Installed in the avionics of a basic or advanced
International

Virtual Reality a Friend And Foe in Terror Fight

As the technology becomes more accessible, it makes the world both safer and more dangerous.
Technology
Image 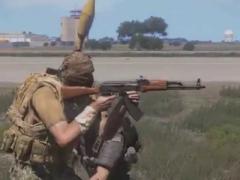 Technical advances in the field of virtual reality, also known as virtual worlds (VWs), are making it possible for the U.S Navy to tap into the collective expertise of its best submariners to design and build the next generation of attack submarines.