The increasing use of readily available and inexpensive commercial technologies by the military is changing the way the Defense Information Systems Agency provides information assurance. As these technologies are integrated into the Defense Department information infrastructure, the agency is adjusting its approaches to providing security for its networks and the data that reside on them. 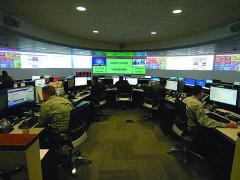 Scientists are developing methods to turn green algae into black gold. A research consortium consisting of two national laboratories, universities and private industry is studying a variety of technologies and processes to convert the humble one-celled organism into the chemical building blocks for biofuels and plastics.

Bionics made Col. Steve Austin better, stronger and faster as the lead 1970s television character in The Six Million Dollar Man so he could defeat fictional bad guys, but it will be biometrics that make the Federal Bureau of Investigation’s capabilities bigger, better and faster to fight real adversaries. And, while the fictional Office of Scientific Intelligence spent $6 million on its singular secret bio-weapon, the bureau will spend $1 billion during the next 10 years to enhance identification systems that will benefit the entire United States. During that time, fingerprint database capacity will be doubled, and emerging identification techniques such as iris and facial recognition will be adopted after verifying their reliability and worth.
Identity Management

A Texas-based U.S. Army unit drew on Iraq experience to provide hurricane relief in its neighboring state. The group dropped into New Orleans, Louisiana, set up vital communications, and then redeployed to another location and expanded its network without missing a byte.

The National Reconnaissance Office has come down to Earth with a new emphasis on ground-based systems for delivering its remote sensing to users. This new focus on the ground infrastructure that supports space systems may be the only way the office can keep its orbital assets in step with the high-technology revolution raging unabated on Earth.
Intelligence

Playing games may do more than simply train an operator in a particular skill. Experts are using games to discover how participants behave in certain situations that only recently defied analysis.
Technology

The Allied Forces Central Europe Command, once a bastion of Western Europe's defensive line, is reinventing itself to serve as a key element in alliance operations outside its area of responsibility. It is consolidating with another regional command, incorporating two of the North Atlantic Treaty Organization's newest members into its structure, and preparing to serve as a parent headquarters to other alliance commands.
International

U.S. Army planners are building a new intelligence architecture that ties closely with military, civil government and law enforcement activities both for rapid overseas engagement and for homeland defense. A new plan outlines an Army that meshes with the intelligence community as a whole to fill future requirements in its multimission agenda.
Intelligence

Annual Report to the Members

As AFCEA International looks ahead in the new year, a look back at the past year may help provide a glimpse of the future. The association enjoyed many successes over the past year.