An advanced radar being designed for the U.S. Navy would provide future warships with a powerful sensor capable of detecting and tracking a variety of threats, from ballistic missiles to aircraft and supersonic, sea-skimming anti-ship missiles. The new radar will combine the capabilities of two existing radars, resulting in fewer antennas on a ship’s superstructure, increased reaction time and the ability to adapt to changing combat environments rapidly. The system also will feature a modular plug-and-play architecture allowing quick system upgrades, more efficient use of hardware and bandwidth, and reduced power and cooling requirements.
Navy 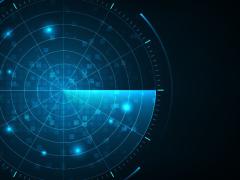 In an age when information dominance is key to mission success, a unit traditionally tasked with evaluating and optimizing long-range, ground-based radar is evolving into a team with a data analysis mission.
Technology

An experimental airborne radar system currently under development may improve tracking capabilities for hard-to-detect airborne and ground targets. The radar would be lofted aboard a robotic airship to float tens of thousands of feet over a region, providing comprehensive and persistent surveillance for up to a year. A key advantage of this high-flying system is that the radar antenna would be a part of the airship's structure, turning the entire platform into a sensor.
Military

Marines Take a Chomp Out of Multiple Radars

The U.S. Marine Corps is combining five radars into one and planning to attach the result to the back of a tactical vehicle to haul it around. By using state-of-the-art, active electronically scanned array radar technology, Marines will have a highly mobile, multipurpose tool that will help commanders track threats in the air and on the ground. The device will address multiple asymmetric threats targeted at troops and offer them the capabilities they need to be effective in battle in the 21st century.
Marines

An airborne sensor system that provides standoff and persistent wide-area surveillance of dismounted troops and vehicles moving through foliage holds the potential to change the scope of warfare. Mounting this sensor beneath an unmanned helicopter would enable identification of possible ambush sites. This small radar also denies concealment and sanctuary to enemy units hiding in wooded areas or moving in the open during darkness or adverse weather.
Technology

Flying Eye in the Sky

The next new aircraft to roll out of the U.S. Air Force hangar may be a powered sensor. Scientists at the U.S. Air Force Research Laboratory at Wright-Patterson Air Force Base, Ohio, have developed radar arrays that can serve as aircraft skin and as structural components. Their research is opening up entirely new radar capabilities as well as materials advances.
Air Force

An experimental technology soon may allow U.S. Air Force F-22 Raptor pilots to use the fighter's radar as a high-bandwidth communications system. This capability would enable F-22s and other platforms to transmit in near real time imagery and other files too large for rapid dissemination by current datalinks. The application could greatly enhance the U.S. Defense Department's network-centric warfare capabilities by turning tactical aircraft into reconnaissance and surveillance platforms.
Technology

Marines Take a Chomp Out of Multiple Radars

Silent Knight Shines In the Dark

Flying at very low altitudes at night or in bad weather entails a range of challenges not encountered in other types of military missions. Whether an operation involves a strike aircraft penetrating heavily defended national airspace or special operations forces covertly inserting personnel, these flights require highly capable radar equipment designed to guide pilots over and around terrain they cannot see. A new tactical radar system will help warfighters navigate safely through hostile terrain under a variety of atmospheric conditions.
Technology