Best and Brightest Of the Sea Services To Receive Copernicus Awards

An important function of the AFCEA Educational Foundation is administering the

THE INTELLIGENCE COMMUNITY IN THE OBAMA ADMINISTRATION

Because there was so little to comment on about the Obama Administration's incoming Intelligence Team, my original intention was to write about the National Comprehensive Security Initiative (NCSI) and the reports that a federal government Cyber Czar would soon be established. Aside from John Brennan's decision in late November to withdraw from consideration for the post of CIA Director, "No Drama Obama" seemed an apt phrase to capture the transition of the IC leadership. As a news story, Intelligence was right where the Obama Transition Team wanted it - on the back burner. This situation changed abruptly though after New Years with the unexpected nomination of Leon Panetta to be CIA Director along with the expected announcement of Denny Blair to be Director of National Intelligence (DNI).

Since 1997, the sea services—the Navy, Marine Corps and Coast Guard—have presented the Copernicus Award to recognize individuals who have made significant, demonstrable contributions to naval warfare in command, control, communications, computers and intelligence (C4I), information systems and information warfare.

Copernicus Award: Recognizing the Best and Brightest of the Sea Services 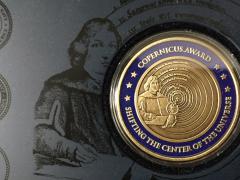 WHAT PRESIDENT OBAMA SHOULD ASK HIS DNI ON DAY ONE

Before getting into what I believe the next DNI should focus on, I suppose its worth considering briefly why President Elect Obama did not name his Director of National Intelligence (DNI) or CIA Director along with the rest of his National Security team on 30 November. According to informed reporting, retired Admiral Denny Blair was slated to be named DNI and John Brennan-- current CEO of TAC, Clinton PDB Briefer, first NCTC Director, and senior Intelligence advisor to the Obama campaign - Director of CIA. According to unconfirmed second hand insider reports, Denny Blair's nomination is being reconsidered because the Obama Transition Team is concerned about establishing the DNI as a military position. Just a few days before the President Elect introduced his national security team, John Brennan publicly announced he was withdrawing his name from consideration for any senior IC post so as not to be a "distraction" to the new administration because of concerns raised by a coalition of 200 psychiatrists about his tacit acceptance of "enhance interrogation techniques" while at CIA. In my view these are inconsequential reasons for denying our next President and the IC the service of two outstanding individuals who would be ready to lead the IC from the moment of confirmation.