Disruptive by Design: Named Data Networking and the Future of Combat Communications

Those within the Defense Department responsible for shaping future warfighting networks should note the opportunities NDN provides for ad hoc, mobile users.

The Internet protocol suite, commonly known as TCP/IP, enabled exponential Internet growth. However, as a point-to-point architecture, it has limitations. Over the past two decades, Named Data Networking (NDN) has emerged as a viable Internet architecture designed to improve TCP/IP’s weaknesses and enable applications at the tactical edge. Those within the Defense Department responsible for shaping future warfighting networks should note the opportunities this provides for ad hoc, mobile users.

NDN operates at the transport and network layers. However, rather than organizing the flow of data based on IP addresses to and from servers as TCP/IP does, NDN queries a network based on named data. NDN, unlike TCP/IP, addresses content instead of hosts. NDN fetches data by using application data object names. In the NDN network architecture, communication does not center on routers and switches.

With NDN, a consumer requests data by sending an interest packet. Producers bind a name to content to create data packets. These data packets include the data, the application data name, some metainformation about the data and a cryptographic signature. Having crypto with the data adds a compelling level of security that permanently binds the name to the content, providing always-available data verification. These data packets are also immutable.

Caching is the first benefit for ad hoc networks. Named data enables in-network caching of data. In TCP/IP, each data request is independent. Even if a network appliance has the data that a second user may request in its buffer, the full IP request must be executed per the protocol. In NDN, data that remains within a buffer or cache is registered and can be supplied based on a consumer’s interest in the named data.

Dynamic forwarding in NDN also benefits ad hoc networks. The use of content stores, pending interest tables and a forwarding information base, manage the propagation of named data through a network. NDN uses multipath, multicast, stateful delivery of data, allowing consumers to find data at the nearest source. These features also help mitigate errors due to transmission delays or disruptions, thereby increasing tolerance. NDN uses different forwarding strategies to optimize these features based on programmed policies.

NDN also offers host multi-homing. In a TCP/IP architecture, swapping from Bluetooth to Wi-Fi or to 4G LTE can cause networking challenges due to the different IP addresses associated with porting to these interfaces. In NDN, the data name is independent of the interface. Therefore, NDN devices operating across various spectrums, with idiosyncratic modulation and demodulation interfaces, can properly route data as better pathways become available and others become degraded or disconnected.

From a security perspective, NDN is resilient to most attacks used to target the TCP/IP stack. NDN enables authenticity through end-to-end security because the named data is signed by its creator at its creation. It allows confidentiality because the named data is encrypted when it is signed. It also enables availability through the redundancy provided in network caching. However, because NDN has different network architecture than TCP/IP, it faces new attacks. Some of these include interest flooding, cache privacy, cache pollution and content poisoning attacks.

In the commercial world, the motivation to use NDN stems from the limitations of TCP/IP, particularly as it pertains to mobile, ad-hoc networks. Applications for current commercial use are written in terms of what data is needed. They do not focus on where the data is located. With NDN, applications can directly deliver data, removing configuration and communication inefficiencies found in middleware.

The military’s vision for the 21st-century battlefield calls for the use of manned and unmanned systems, sensing and sharing information across a joint multidomain collection of weapon systems, to outpace near-peer adversary’s targeting cycle. These systems presumably will have unique communication interfaces, come into and out of range of other systems, and may be degraded or destroyed over time. Traditional TCP/IP network architectures will struggle with these challenges. Therefore, as the Defense Department develops a vision for connecting these platforms, it should consider adopting NDN solutions. 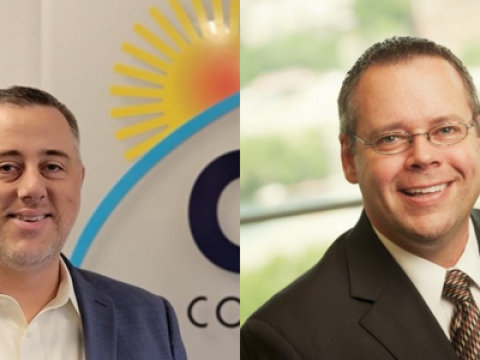