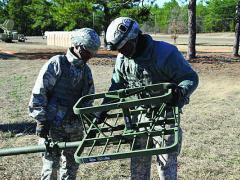 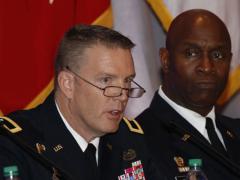 Setting up and maintaining a communications network in a war zone is difficult under any circumstances, but it is especially complicated in a battlespace without defined front lines. To meet this challenge, the U.S. Army is combining military systems and commercial solutions to establish a reliable network for commanders and warfighters in operation Iraqi Freedom.
Military

Warfighters depend on signaleers across the spectrum of operations.
The Cyber Edge
Cyber
Army
Image 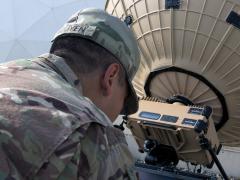 The Signal Regiment faces daunting challenges in providing and maintaining an always-on network for widely scattered U.S. Army forces. Commercial Internet protocol for voice, data, video and network operations is essential to both combat prowess and the Army’s transformation into an expeditionary force.
Army

Words From the Mouth of The Boots on the Ground

The Stryker is a rarity in the military world—an item that satisfies the top commanders and warfighters seeing action in battle. While support from the top does not always translate into success on the ground, in the case of the Stryker the troops in combat, including those using it for communications missions, are basically as pleased with the vehicle as are the planners and decision makers in the United States. The numbers and uses of Strykers show no signs of decreasing as the vehicles mark half a decade in theater, and the U.S. Army is adding additional capabilities to the next round that is expected to deploy even as the eight-wheeled automotives see daily action now. A few changes could enhance the value of this vehicle to signal troops, but overall the reviews from those using the vehicle in combat are positive.
International

The Adaptive And Agile Communicator

SIGNAL Connections is your source for news about your chapter, your region and your profession. Redesigned last year to include a personal touch, the e-newsletter not only features the latest industry activities but also pulls events information from the AFCEA calendar and Chapter News from SIGNAL Online.